Our Palava arrived Friday the week before last, and since the weather was nice enough (warm, with patches of rain on Sunday), we immediately took it on a proper test ride on the Altmühl for the weekend, repeating an earlier trip we had on the same section of the river. Below I describe why we chose an inflatable, how we chose it, and how it lived up to our expectations (tl;dr: we like the boat). 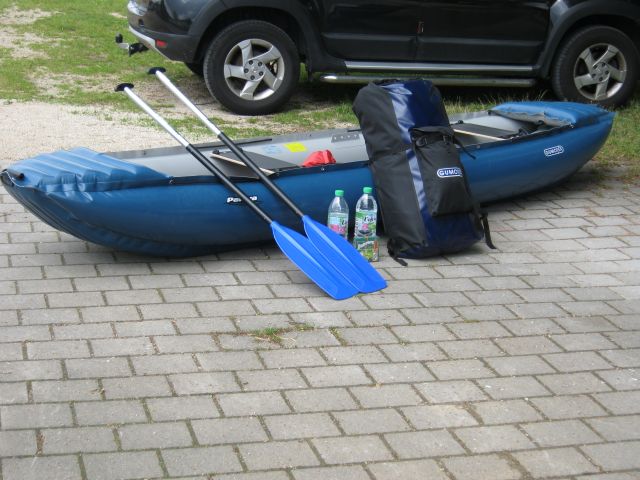 Why did we buy a funny looking inflatable canoe?

Guess after having a folding bike this is the next logical step (anyone knows about Jetsons style folding cars? :)) - just kidding...

While we have been canoeing for years, only moving to Germany made us think seriously about owning a canoe. The German canoe rental scene is rather different from what we were used to in Hungary, namely:

Thus having our boat would financially makes sense (would pay for itself in the worst case in two seasons) and would give us freedom in our weekend/day off planning.

We first considered a regular canoe, but quickly dismissed as being impractical for two people without a car (even with a car it's cumbersome and involves and additional train/bus ride to fetch the car from the start and then drive back down for the boat, potentially with one person waiting there). And if one didn't have a garage/garden, storage would be an extra problem.

Folding boats were also out of the question. A friend of mine has a folding kayak, and we didn't have a good experience with it: it is too heavy, takes up too much space to be carried without a car (and the actual design of the boat was too low seated, and thus it wasn't comfortable to paddle).

Inflatable kayaks - while they are cheaper and there are many models to choose from - were not an option either, since my girlfriend doesn't like kayaking :). Thus we were looking at inflatable canoes - fewer (Grabner was the only other alternative we have found) and more expensive (guess the smaller market/demand explains it) choices. Thus we settled on the Gumatex brand.

Last year we met a retired couple who had a Palava, and they were kind enough to let us try it out (thanks again!). We concluded that it is a usable boat - and it's durable (they had it for about 10 years, only problem is now it has to be pumped a bit each day, while in the past it could go for days without). However, initially we were looking at the Scout, for having a proper canoe shape. But it was pretty pricey for a blind purchase, thus we were searching for a way to try it out.

We found the opportunity by accident. The nice people at Sport Schmidt in Friedriechshafen organized a test day in May, so we visited Lake Constance just for this occasion. Since it was there, we also tried the Baraka, but that is more suited for whitewater than the normal rivers we had in mind, so only the Palava is compared below with the Scout.

In the end, we decided against the Scout. It's a great boat, but the Palava meets our needs, so the only two useful features of the Scout would be the shape and the straighter path. These are nice to have, but together with paddling discomfort we didn't feel paying almost double would be worth it.

The two days on the Altmühl & impressions of the boat

This river doesn't really flow, and there are many dams that require hauling the boat (5 on the Treuchtlingen - Dollnstein (29km) and 3-4 on the Dollnstein-Eichstät (17km) section).

Putting the boat together is quick (3L double chamber pump) and intuitive, even when doing it for the first time. I wish the included bayonet-valve pump adapter had a loop (so we could secure it with a rope to the boat), but that's my only (and minor) complaint. One thing we should have purchased is a pressure gauge, but I expect we'll quickly get a feel for the right pressure. While talking about pumps: we've met a family with a Sevylor Hudson, who were rather happy we had a pump they could use - they left theirs in the car, and the kayak somehow leaked air. Good reminder to always carry the pump in the boat!

Comparing the two Treuchtlingen - Eichstät trips (here is last year's log with a rented canoe and here is this trip's), with the inflatable - to our surprise - we ended up being faster by about half an hour (5.5 vs 6 & 3.5 vs 4 hours) both days (even though last year it was raining heavily, so we were quite motivated). We assume it's because of the hauling - getting out, picking up the boat's backpack (about 80L drybag, which fits our 60L backpack and more easily), getting the boat out (beware: leaning forward with an 80L backpack is going to impact your balance :)), walking, putting it back on the water is essentially a non-operation, almost like just walking a bit to stretch your legs. And of course, we were familiar with the river already, so there were no navigation problems.

Paddling in the rear is somewhat harder - I did expect sour muscles in my back for the first canoeing of the year, but I was shocked to learn about the aching upper arm while attempting to drink a pint :) The boat turns quickly if you miss a beat or two, and thus much more corrections were needed. Also, I didn't have my custom made (by Denes Canoe) paddle with me, and the standard size was just a bit too long for me in this boat.

Supposedly one should be on the knees in this boat, with support from the seat, but I've got bad knees and I anyway I need to switch positions in a normal canoe too, luckily, it's possible to sit normally too (though that's when you need a shorter paddle or get the sour muscles in the arm - or at least I did and suspect the normal sitting position is a contributor). The classic position (thighs almost horizontal, shins vertical) is unattainable, but not bad. My girlfriend felt totally comfy in the front, so it might be just me.

The ears have to be retrained, for the noises the boat makes when its scraping the bottom or a rock, but really few times does it do that - my non-scientific impression is that it copes well with really shallow water.

The backpack that comes with the boat is OK, but carrying the 22 kg over longer distances is no fun (but not a horrible experience either). There is no padding and chest/waist straps, which I missed - I've been spoiled by the great waterproof backpacks from OverBoard. However, it's a solid waterproof bag. I wish it had reflective stripes on it, since we leave early/arrive late with the train, and thus for the walk it'd be useful. The bag is bigger than strictly needed, so both of our three piece paddles could be comfortably packed there too. The pump doesn't fit in however, and there isn't a proper external attachment point for it. But the boat is perfectly transportable, and we are really happy about it!

Packing away the boat takes about as long as a tent (plus the time required to clean it - and unless you had the time to properly dry it, it's worth drying it at home too).

In the end, the Palava met all our expectations - we had a great weekend canoeing!