After converting my Neuzer Courier DT fitness bike to use drop bars, I swore never again to do that, but just buy a road bike instead.

However, since bike transportation is hard, I chose my commuter folding bike for the trip from Germany to Budapest.

However, the roughly 150km/day does require multiple hand positions, and I'm a roadie at heart, so no butterflies for me.

That left the aerobar :) While initially I was concerned since a) I've never had one before b) my bike has 20" wheels; the local bike store was kind enough to suggest that I buy one, take it for a short, few hours test, and if unhappy with it, they refund it.

And I've learned that aerobars are the best thing since sliced bread.

I got used to it fast, and while it is not usable in as many situations as drop bars are (don't use it in traffic/crowd, even if you've got fixie-trained traffic senses, since you got no brakes!), it does give a racing feeling to an otherwise normal bike :)

Adjusting the thing took forever though, so I actually went back to the store and upgraded to a single piece one, since I do fold the bike daily (the picture is with the old one).

And yes, I know it looks odd. But I am after functionality, not beauty! 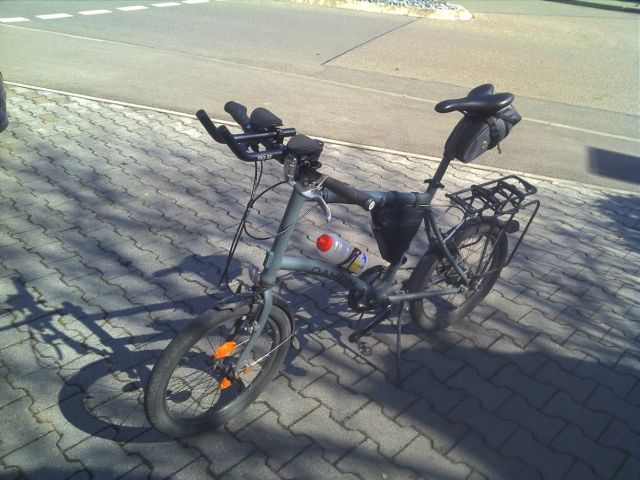