T-1 - or a recap of the trip preparations

It's been a busy few weeks. To recap my preparations:

I've got a new tent

We have just recently moved to Germany, so still a lot of things are still in Hungary. None of my potential cycling friends could join me for this trip, so the plan that they'll bring my small tent here is not an option. The tent we have here is for 3-3.5 people and has a huge front - and weighs accordingly. After it turned out how horribly expensive it is to send a tent by mail, we've gone shopping and got a medium, 2 person tent (Gelert Eiger 2) for a few euros more than what the postal costs would have been. I'm a bit nervous as always with new, untried (under real conditions) equipment, but the brand's similar solo tent got generally gets good reviews and there were no visible holes when we pitched it in the flat. 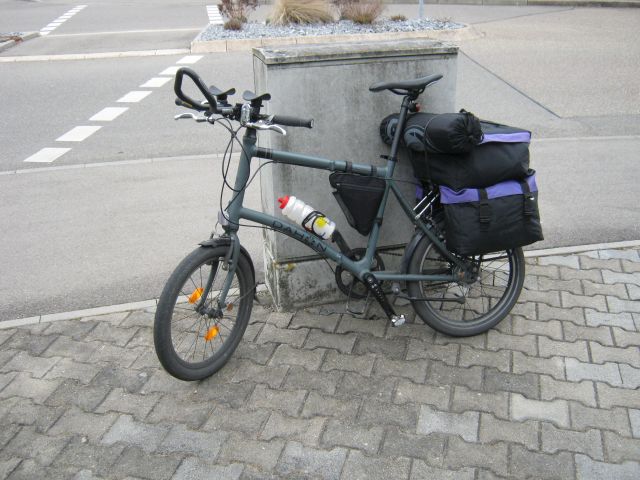 It's not pretty, not waterproof, and is a bit fiddly to install. However, even though it's a three compartment model, it weighs only around 0.7kgs. And its durable, we have already used it on our prior trips and it holds up. I'm dreading the day it stops working, since a quick online search shows all available bags are *heavy*...

Took the bike with full luggage for a test ride

I actually planned a Crailsheim-Nürnberg trip, but had to give up after 20kms - the bowden coating and the bowden was torn and I couldn't shift gears anymore. I was stuck in steep mountain gear - on flat terrain. Max speed: 13km/h. But then my cadence was already in the sky!

I also got a flat tire reminding me that I've been meaning to replace the old rear one, but never got around to it. Since I'm lazy, I just bought a new one, planning to bring that along and mount it after the next flat. But the next flat came vefore the start, just finished replacing it. Friday the 13th :) 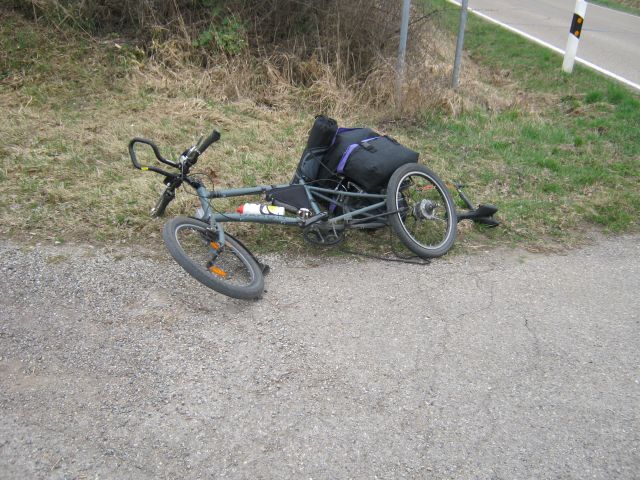 Back to the trip/bike - it felt more stable than when i was touring with the Neuzer Courier DT. However, speed - even when I had multiple available gears - is less than what I'm used to. The extra circa 13kg could do that I guess, not mentioning the extra air resistance. But the riding still feels fun and I still could overtake people :)

Got some spare parts

Though I am not a bicycle mechanic, after having been burnt by the irregular stem screws (why couldn't Dahon use a standard sized one, available in any shop is still a mystery to me), I asked my local dealers for spikes (of course front and rear are of different length) and stem screw. At least I can give them to any mechanic if needed.

Got a bicycle computer

Sigma 1009. The phone gps/software can be unreliable, and I am a data junkie - not knowing how far/fast I traveled would disturb me. I would love to get something like the Rox 9.1, which enables detailed analysis, but I can't justify the cost, especially with the potential purchase of a inflatable canoe on the horizon. Slight problem with this one is that I only got around installing it today, and - Friday 13th again - it doesn't work. Maybe too wide a fork? Will check tomorrow morning with the bikeshop.

Not much :) I'll take my smartphone with a spare battery with me (plus a backup dumbphone which goes for weeks with one charge :), that should last for a full day, even with continouous gps recording.

I'll see whether I can get an austrian SIM near Passau, if not, roaming with a special package will be the alternative. But I hope I get a SIM.

First I thought it's an overkill, but since we've run into problems in France ("sorry, this camping is only for Caravans"), I wanted to be sure. I knew the Austrian part is no problem, but the German ones I knew nothing about. Searching google maps alone is not enough, some campings don't say they are a camping on their website (read through as many trip blogs as you can for these!), and most places respond to emails within a day. And I've learned of some closed ones, or ones that don't open till May, so I think it was worth it.

I'm bringing along a printed address/phone list. I love modern technology, but some things I don't want to risk not having access to :)

I was considering getting a stove, but the experiment is delayed, and I'll stick to restaurants/pizzas/döner&co for the evening. Butterbrazel for breakfast, and the fruits & power bar likes for the day. Or whatever the Imbisses/Biergartens will have on the way.

After a lot of research, I finally decided that I don't want to start the tour by going from 300m to above 1000 in the first day, so the Bodensee will have to wait - messing up bad knees on day one don't seem fun. So it will be Crailsheim - Dinkelsbühl, the the Romantische Strasse to Donauwörth, and from there it's the Donauradweg all the way to Budapest. Given I was unable to complete the longer test trip, I have no clue how much I can cover in a day, so we'll see. But I still think the 140ish km/day is still realistic, and since I am leaving tomorrow after my girlfriend took the train, I have an extra half day for Havarias.